I grasped his penis with both hands.
Urine was spraying into the air, while my fellow-intern at Morrisania Hospital in the South Bronx stood by holding a bladder catheter ready for use. Water retention due to heart failure had poor Mr. Jones’s body so swollen from the waist down that the business end of his urinary system was buried in edema, and the high-dose diuretic we had shot into his vein only made matters worse by turning him into a human fountain. My job, which I confess was complicated by spasms of laughter, was to squeeze away the excess fluid from his foreskin so my similarly incapacitated colleague could have a chance at finding the hole.
This may have been the only time I laughed out loud in three years of hospital duty as a resident specializing in internal medicine. A more typical form of emotional self-expression was crying in the stairwell.
We eventually managed to get the catheter in, stop giggling, and retire to our on-call rooms for a few hours sleep. It was only at morning rounds, presenting the case to our team, that we caught on to what was really going on with Mr. Jones. His problem lay as much in his isolation as in his heart: for weeks, while his legs ballooned progressively from human to elephant proportions, he had been holed up in his single-room-occupancy digs without any human contact, before his landlady happened to knock at his door, see the state he was in, and call an ambulance.
During my medical training in 1970s New York City we saw patients like that all the time, so bereft of social connections that they could slide downhill toward end-stage disease, or into the grave, without anybody pushing them to seek medical care. I’ll never forget one 17-year-old heroin addict, infected by a dirty needle, who lay in septic coma for five days on the floor of her studio apartment, before a sister chanced to stop by just in time to save her life. In Italy, where as Luigi Barzini said the only fundamental institution is the family, a teenager would never be abandoned like that to her own resources. Here, even junkies bring their dirty laundry home on Sunday for mamma to wash.
*****
Mobile phone readers: to subscribe, scroll down.
Posted by Susan Levenstein, MD at 6:04 PM 2 comments: 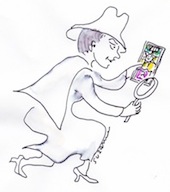 Peppino had great faith in my powers. I remember how one day in the ‘80s he set a friend's laboratory report in front of me and asked me for an interpretation. At first I shook my head at this absurd request, but he was so crestfallen I agreed to take a look.
What he’d handed me was a flimsy pink National Health Service form with blurred numbers scrawled next to enigmatic abbreviations. I deciphered the first ones as hematocrit 35%, red blood cells 4,000,000, white blood cells 9000, eosinophils 10%… "She's a little anemic, but probably not by losing blood, maybe she's been ill recently, though judging by her white blood count I’d say she doesn’t have an infection at the moment. It does look like she may have hayfever…" Transaminases SGOT 7, SGPT 9, gamma-GT 60. I was warming up: "She should probably cut down a bit on the wine, it’s affecting her liver, but there's no serious damage." Fasting blood sugar 98, BUN 15, creatinine 0.9, urine red cells 0, white cells 2-3: "No diabetes, her kidneys work fine, no signs of urine infection." The exercise sat somewhere between Sherlock Holmes and Tarot cards. Sodium 138, potassium 3.4. "Does she have high blood pressure? Yes, that’s what I figured. Do you know if she's taking a water pill? Yes? Well it’s driving her potassium down a bit, she needs to eat more fruit." Sedimentation rate 25 "…She's in her 50s, like you? Then this is normal for her age, if she were younger it would be a sign of inflammation…"
It astounded me to see how much information was stashed in those numbers.
Another time Peppino brought me his own EKG. When I interpreted it over my kitchen table his mouth fell open – for him the needle’s tracing was an oracular mystery that could only be read by the cardiologist who had actually strapped on the electrodes.
Sometimes I miss those days when doctoring in Italy was half sorcery, and physicians competed with the hordes of operators telling fortunes on live TV. And I also miss Peppino.
A version of this post is being published simultaneously in my column in The American In Italia, Bedside Manners.
Note to mobile phone readers: you can now subscribe to receive this blog by email - scroll down, sign up!
Posted by Susan Levenstein, MD at 2:42 PM 1 comment:

Blog Of The Month

A very nice site for expatriate women called Expatclic is featuring Stethoscope On Rome as their Blog Of The Month. Check out their little interview…
Posted by Susan Levenstein, MD at 2:36 PM No comments: