Date: December 24, 1994. Place: Indian Springs Spa, Calistoga, California, two hours north of San Francisco. My second-husband-to-be Alvin Curran and I emerged from our mud packs so blissed out we couldn’t imagine trudging back down to where we were staying in the city, so we asked for a room for the night. “All booked up,” replied the receptionist from under her teased beehive, “And since it’s Christmas Eve so will be everywhere else in town that has a hot pool.” We kept pestering her until she admitted, “Well there is this one place, a good 45 minutes from here, they might have room. But it’s kind of, umm, funky.”
I dialed the number. Yes, they did have hot spring water and yes, they did have a free room. “We have a problem, though,” I said. “We only meant to go to Calistoga for mudpacks, so we didn’t bring any bathing suits along.” “Oh, that’s ok,” said the voice, “We can arrange something.”
The drive took a solid hour through driving rain, over roads that shrank to lanes then to trails, and by the time we handed over our parking fee at the gate of Harbin Hot Springs night had fallen. As we inched forward through the mud, pale figures began to emerge from the darkness, swinging flashlights, and sporting boots but not another stitch of clothing. Both “funky” and “we can arrange something” suddenly made sense: this joint was nudist!
The next morning as we stood soaking to our chins along the edge of the warm pool, exchanging smiles with fellow-hedonists, a burly fellow climbed in as naked as the rest of us, scanned the faces, chose mine, and extended his hand saying, “You look like you could use a watsu.” “A what?” “Close your eyes and I’ll show you…” The WATer shiatSU treatment he gave me, swishes and stretches and massages on the surface of the water, was a blissful pas de deux that must have lasted only ten minutes but felt like forever. In my life I’d had lots of massages and other kinds of body work, but watsu was in its own league.

As I later learned, watsu was invented in the early 1980s by Harold Dull, who moved to Harbin after making his name as a poet in San Francisco. His inventive spirit transported zen shiatsu, which he had studied in Japan with its inventor, Shizuto Masunaga, to the warm spring waters of the hippie spa. The experience is relaxing and energizing at the same time, somewhere between meditating, flying, and dropping mescaline. At least that’s what it felt like to me.
After some years of making runs up to Harbin every time I was in California, in 2000 I decided I’d try seeing what it was like to take on the other role. Giving watsu treatments turned out to be nearly as mind-blowing as receiving them, and three hundred hours of training later I was ready to start practicing bodywork on days I wasn’t seeing patients with colds and cystitis. 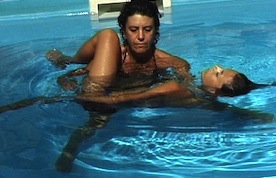 There was only one hitch: finding the right pool. A watsu pool has to be large enough to swing a client around, calm and quiet enough to permit complete relaxation, just the right depth, and just the right temperature (34º-35º Centigrade, 93º-97º Fahrenheit). Jacuzzis are too small, heated swimming pools not heated enough. Italy’s many famous hot springs can be great for watsu, but the closest to me is an hour and a half drive.
After an exhaustive hunt I found a place inside Rome that qualified, barely: an off-kilter urban spa provocatively named Extasia. The water was so shallow I had to work literally on my knees, and the risk that my client might get skewered on a sharp corner that stuck out into the tiny pool kept me figuratively on my toes. Plus we all couldn’t help but notice one tall white-coated employee who was always popping in and out of the reception area, sporting a short skirt and a strangely prominent Adam’s apple. I did manage give a couple of dozen sessions…
…until one day I heard the place had been closed down – by the vice squad. When eventually they did re-open, they thought it more prudent to bar outside therapists.
I moved on to the lovely swimming pool in the basement of the Grand Palace Hotel on Via Veneto, which they were willing, for a reasonable sum, to heat to watsu temperatures on special request. But around 2010 it too closed down, voluntarily, and when it reopened two years later the new management couldn’t be talked into hosting such a suspicious-sounding activity as water-based massage. Alas, I don’t yet have a decent substitute yet anywhere in Rome – the only appropriate pool I’ve found prices itself out of the running. All suggestions are welcome.
Saddest of all, my beloved Harbin Hot Springs was destroyed in the northern California fires of 2015. It is still struggling to rebuild.
*****
Mobile phone readers: to subscribe, scroll way down.
Posted by Susan Levenstein, MD at 7:03 PM No comments:

If I had felt like it, when I opened my medical office for business on Rome’s Via Scialoja in 1980 I could have set up a double-duty exam table that tilted thisaway for me to take your Pap smear and thataway for me to fill your cavities. True, most dental drills in Italy even back then were wielded by guys who had gone through all the paces: first a regular medical degree, then a book-based specialization in teeth, finally a practical apprenticeship with a dentist father or family friend to actually learn the job. But a good chunk of the Dentista offices were run by . . . General Practitioners, who rounded out their income with improvised odontoiatric skills. Until 1984 anyone who had graduated from medical school could legally set up shop as a dentist in Italy, without having done a specialization and without any hand-in-mouth training whatsoever. It must have taken nerves of steel. By now, thankfully, that cohort of medical moonlighters are almost all retired.
In Italy the default for doctors and hospitals is public, but the default for dentists is private. For one thing the waiting list for dental work on the public health system can be two years long, and for another NHS dentists are notoriously "cavadenti" who yank teeth instead of fixing them. So whereas private medicine in Italy is largely for the well-to-do, private dentists cater to the masses. But – paradox – they charge twice what they do in the States. The circle is squared by a semi-clandestine horde of cut-rate imposters – as per one of my first blog posts.
(There are phony physicians too, of course. One Roman pseudo-doctor, unmasked after 15 years of practice, rode off into the sunset on his bicycle. Two months later a clochard died of exposure on the steps of a noble Palazzo: it was him. But, then, in 2003 Florida alone convicted 101 fake physicians, so we can confidently guess that right this moment thousands of charlatans are practicing medicine without a license in the US.)
Nino Campanelli, my own dentist for my first 30 years in Rome, had a delicate touch and was a whiz with the Xylocaine. Once, though, I had an emergency while Nino was out of town, and when his substitute leaned on my shoulder for leverage it came close to dislocating. The day they gave a lesson on how to handle flesh gently he must have played hooky. I told my beloved Nino he’d handed me over to a backup who was oblivious to patient comfort. He answered with a sigh: “Yes, I know, he’s a little rough. He knows his stuff, but until now he’s been working in the National Health Service. He still needs to learn how to behave with private patients.” That’s all I know from personal experience about public dentistry, and all I need to know.
*****
Mobile phone readers: to subscribe, scroll way down.
Posted by Susan Levenstein, MD at 10:22 AM No comments: