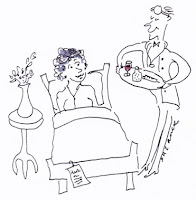 Italians have never been much for Calvinist-type frugality. The Catholic hierarchy’s response to Luther’s 16th century revolt was a Counter-Reformation construction boom which aimed to woo back the faithful by dazzling them with ever more lavish churches. Rome’s Gesù is a prime example, with its dazzling colored marbles, swooping angels, and mouth-watering lapis lazuli columns. Same thing for clothes. Where my generation of American girls were taught to underdress – “look in the mirror before you go out, and remove one piece of jewelry” – Italian ragazze would toss on an extra necklace.
Public hospitals in Rome are shabby and General Practitioner offices run to the bare-bone, but in one medical niche the glitz principle holds: the vast private system. A ghostly for-profit shadow hovers alongside the National Health Service, complete with its own doctors (including me), laboratories, and hospitals. A private casa di cura or clinica will have an atrium decked out in Ficus benjamina, oil paintings, and design furniture, and rooms with disposable slippers and a comfy sleep-on couch for your spouse. A Italian patient of mine, exposed to the private system for the first time, cast his eyes around and said in wonder, “My God, this hospital’s so clean.”
Once you get past the glitter, Rome cliniche usually offer a narrow range of medical services. One may concentrate on childbirth, another on cancer, a third on cardiac catheterization, none covering all the bases and most preferring elective rather than emergency procedures – think hotels with operating suites. Here and there you’ll find a small intensive care unit, but they never have a real Emergency Room. A couple claim to cover emergencies 24/7, but the one time a patient of mine tested that boast the hospital flunked: she showed up with an asthma attack, something anyone with a medical degree should be able to handle, and was sent home without being examined much less treated because they “didn’t have the right specialist.” As the locals say with ironic intent, Tanto siamo in Italia, What can you do, we’re in Italy.
*****
Mobile phone readers: to subscribe, scroll way down.
Posted by Susan Levenstein, MD at 10:41 AM No comments:

After a decade of widowhood my ex-mother-in-law, Mariada, finally made a visit to the Italian telephone company offices to change her account from her late husband’s name to her own. Employee: “If you want to change the name, Mario has to endorse it. You can just sign his name here.” Mother-in-law: “I can’t sign it for him, he’s been dead for ten years.” Employee, helpfully: “Why don’t you step outside with the form and sign it in the corridor? When you come back in I’ll pretend it’s the first time I’ve seen you.”
Glossary: infrazione
A petty violation of the law. A colleague was explaining the route to drive to the University: "You drive down Via del Quirinale to Largo Santa Susanna, and then… no, you're too American, you can't." "Can't what?" "Well, then you have to make a slightly illegal left turn, a small infrazione, it's the only way to get there."
Italian rules often seem made to be broken, but they can turn inflexible when you least desire it. I helped a schizophrenic patient through infinite red tape to get an Italian disability pension, a welcome supplement to his meager wages from a manual job an hour’s drive from home. One week after he received his first pension check he was notified that now that he had been certified as disabled his driver’s license had been automatically revoked.
The casual lawlessness rubs off on you. I shocked a friend by distractedly bypassing a dozen cars waiting at a California tollbooth and sneaking back into the line. I shocked myself by swearing to the State of New York I’d lost my drivers license when I’d actually handed it in to the authorities here in return for an Italian one. I shocked my mother by suggesting over the phone she sign my name to a jury duty summons; once she’d recovered, though, she said what the hell and practiced my signature until she could forge it on the dotted line, savoring the glee of transgression after 65 years of walking the straight and narrow.
Italians’ behavior is governed by the ad hoc and the ad personem. They consider Americans’ reliability to be rigidity, our rules to be unwarranted limits on options, our planfulness a brake on spontaneity, our constant pleases and thank yous a defense, our lofty ethical precepts hypocritical cop-outs geared to avoiding immersion in the complexities of human relations. Romans prefer a “half date,” a mezzo appuntamento, to a definite one, and they don’t hesitate to cancel at the last minute if they’re feeling tired or antisocial. When I told a friend this seemed rude, he said an unwilling dinner guest wouldn’t be fun anyway.
Italians disdain rule-worshippers just as illiterate people disdain those who can’t remember anything if they don’t write it down. My friend Daniela once made a U-turn on an empty small-town street in Switzerland. A woman leaned out her second-floor window and yelled a reprimand. Daniela – who hails from Italy’s relatively law-abiding North – responded by making another U-turn, then another, then another… Italians are great at improvisation and seat-of-your-pants, farm by the phases of the moon when they’re not designing Maseratis, and always feel more secure having a low-tech backup. They wear a condom but pull out anyway. They shine during Third-World travel: when things go wrong, stick with the Italians, who get busy devising a fix while the Americans are sitting around waiting for the authorities to show up. Neapolitans call it l’arte di arrangiarsi, the art of muddling through.
There are traffic lights in Rome deemed unnecessary by popular opinion. You’ll be honked at if you stop.
*****
Mobile phone readers: to subscribe, scroll way down.
Posted by Susan Levenstein, MD at 11:13 AM 10 comments: