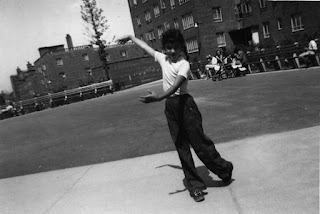 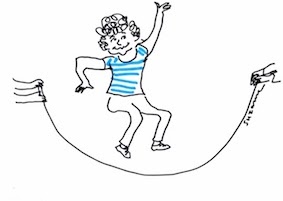 We had a piano for my father to play Bach, Mozart, and Count Basie. At age four I sat down on the stool like he did and slammed my open hands on the keyboard expecting music to come out – I still remember my shock at the cacophony! I got to start piano lessons afterward, learning to read notes about the same time I learned to read words.
In 1954 I was scheduled to be a guinea pig for the Salk polio vaccine but I hated injections (I still do, that’s why I’m so good at giving them). My mother spent hours giving me make-believe shots with a bobby pin so I wouldn't pull my arm away at the moment of truth. She told me I had to get used to needles because I would need them to take away the pain of having a baby – an issue fresh in her mind since my little brother was just two years old. At the last minute I caught a cold and didn't get the vaccine after all, disappointing everyone except myself.  When they taught us in medical school that some of those first batches hadn't been adequately inactivated and had given lots of kids paralytic polio, I took it as a sign of personal grace.
My health suffered no serious threats. Perpetual scabs adorned my knees – when my mother once hinted there would come a day when I would no longer have them, I didn’t believe her. I landed on my coccyx roller skating and couldn't sit down for a week, I split my chin open showing off at potsy, and there were warts to paint, but no broken bones and no appendicitis. I even managed to hang on to my tonsils.
Pomonok has changed some, but – according to one contented denizen recently – “Residents are born, raised, and never leave here!” So next time you hear anyone badmouthing “the projects” maybe you’ll remember my project: kiddie heaven.
*****
Mobile phone readers: to subscribe, scroll way down.
Posted by Susan Levenstein, MD at 10:12 PM 2 comments:

In Italy as in Tony Soprano’s New Jersey, the garbage business is traditionally in the hands of the Mob.
The ubiquity of organized crime is no surprise when it comes to Italy's South, cradle of the Mafia and its regional offshots. Nobody’s shocked to hear that the Calabrian ‘Ndrangeta runs hospital kitchens and has the corner on artificial limbs. It’s par for the course if Goodfella funeral directors wander the hospital wards in Naples with impunity in search of imminent cadavers to snatch, or if Sicilian regional administrators let public hospitals deteriorate so their Mafioso friends can build private ones. But when we read reports of Mafia-owned businesses getting the contracts to build and renovate hospitals in previously off-limits northern cities like Verona, Savona, and Milan, I for one find it frankly amazing.
Convicted Mafia bosses are always getting assigned to house arrest instead of prison on the grounds of ill-health. Failing which, they arrange transfers from jail to cushy private hospitals on trumped-up medical excuses. One easy trick is to buy off a surgeon to perform a biopsy and then switch the histological slides, so the pathologist will diagnose a healthy boss as having cancer. In my favorite case the gentleman had been passing himself off as a kidney dialysis patient. When a suspicious judge sent around an inspector to check with his own eyes that the near-death lab specimens came, indeed, from the man of honor, cooperative doctors rigged up a bag containing the blood of a real dialysis patient on the boss’s back and ran a catheter down through the sleeve of his hospital gown. That way a nurse who was in on the scam could by a little sleight of hand draw a diseased blood sample, in front of the inspector’s eyes, from the plastic tube instead of the vein.
*****
Mobile phone readers: to subscribe, scroll way down.