With the publication date for Dottoressa looming, I thought I might tell Stethoscope On Rome readers how the book came into existence. When I began reconstructing the history of that project I found myself wandering back farther and farther, meditating more generally on creativity in my life, following side paths, exhuming long-forgotten relics in dusty boxes. So I’m going to have to split the genesis of Dottoressa into two blog posts. This one goes back all the way to my childhood . . . hope you’ll forgive the self-indulgence.
In theory Creativity was my parents’ highest value, and they constantly complained at the dearth of Creations from their offspring. But in practice there wasn’t much happening on their side either. Mostly a few animal shapes my mother twisted out of clothes hangers and hung as decoration. My parents were were too poor for original artwork, and too devoted to Less is More modernism to stick cheap prints on the walls, so it was wire elephants or nothing.
We did own a hand-crafted marionette, Susie Goosey, but it was my artist aunt Cyril who had done the crafting. Family dinner table conversations were at the antipodes from Creative. Every word came straight from the dictionary – no ambiguity, no banter – and nonverbal communication was not on the menu. Once many years later my mother watched me and my ex agree wordlessly that he’d start cooking dinner, and she was mystified.
One thing I did do a lot of as a child was take tests. I parroted strings of numbers, came up with endings to half-finished sentences, heard “black” and said “white,” arranged little colored cubes to copy patterns, saw butterflies in inkblots, made up stories to match pictures (like the one above). My psychologist mother was taking courses in testing, and I was her guinea pig.
My parents hoped summer camp might make me more Creative. Camp Lakeside, which I attended when I was 12 and 13, was entirely populated by red-diaper kids sent there to learn both the breaststroke and Which Side Are You On. Camp Hurley, at 14 and 15, added an admixture of black kids with street creds. Two girls were kicked out after being caught in one of their bunks, in flagrante. My best friend, Ronnie, asked me if I was still a virgin. We were convinced saltpeter was being dusted into our food, to channel our hormones away from sex and toward – you guessed it – Creativity (lopsided bowls, drawings embossed on copper…). My Creations all sucked, but I didn't care. I was more into learning to dance the mashed potatoes and joining forays off-site to score Rocky Road ice cream. 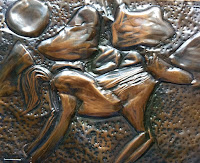 My mother found the best test ever the year between my two summers at Hurley, the Strong Interest Inventory. Hundreds of questions, to be answered fast without thinking: Do you like watching sporting events? Stamp collecting? Hanging out with friends? Would you rather work in import-export or a research lab? Do you prefer playing it safe or taking chances? The Strong chewed up your answers and spat out your destiny. Mine was “Author.” The idea was that I had answered those apparently random questions the same way as real-life authors. I shrugged and ignored this prophecy – at that point I knew for a fact I’d be a mathematician.
OK, yeah, I did write poetry. My high school poems ranged from mocking political doggerel about “duck-and-cover”
It’s time to have a shelter drill,
So come on, everyone!
Let’s leave our books and write our wills
And then we’ll have some fun…
to in-your-face imitation Ferlinghetti
and carolbethdorispamela necked furiously backstage with joejeffharrybillpete the guywhoworksthelights and ripped her dress
shorts
blouse
jacket
slacks…
and (heaven help us) erotic sonnets
I almost wish you wouldn’t touch my hand
with yours; your fingers violate the secrets
of my palm, deflower the softest tips
of all my fingers…
The political poems went into Swirl, the Wantagh High School writing magazine, but the sex-drenched stuff got nixed by the faculty advisor. I guess I was lucky – they could have censored out the political ones as well.
Poetry didn’t count as writing, it was just stuff that happened, that emerged unbidden when I was feeling angry, hurt, indignant, or unrequited as I often did. In my eye what real authors did was write fiction, which was and still is beyond me.
In college I never wrote anything besides term papers, my spare time consumed by sex drugs and rock ‘n’ roll. Even afterward, as one friend unkindly pointed out, I didn't make things. In the ‘70s everybody else, including her, was creating something: sweaters, pillows, paintings, macrame wall hangings, earrings, belts, mugs, songs... The closest I came was Mozart piano sonatas, but those were mere ephemeral sounds, and they were based on slavish obedience to black spots on paper.
I did make one stab at making things, on a trip in 1972 to Turkey, where I boldly purchased a sketchbook and some pencils. I’d never been able to draw anything. But in Istanbul I happily sat for hours across from mosques and pavillions, copying the façades with my thumb as a measuring stick. I always left out trees, people, and any other hard parts. My efforts were more successful at attracting curious children than at producing recognizeable much less artistic images.
In 1973 when Kevin Moore, the love of my life, was killed by a truck riding his bike across the Brooklyn Bridge, I found myself writing poetry again. Every day a new metaphor for anguish would come to me and pour out onto the page. For many years thereafter my losses inevitably, and my joys occasionally, would transmute into free verse.
But never, until well after I moved to Italy years later, did it occur to me that anything I wrote might be of interest to anyone except myself.
…stay tuned for part 2 of the Dottoressa Story next week.
…and if you’d like to preorder the book:
In the United States:paperback, Kindle
In Italy: paperback, Kindle
In the United Kingdom: paperback,Kindle
In the rest of the world, paperback
Posted by Susan Levenstein, MD at 7:28 PM