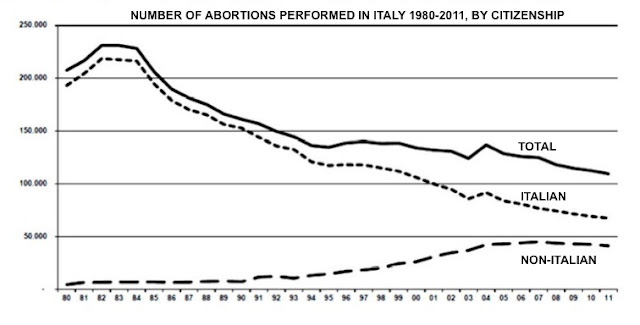 The bottom line is that the Church has indeed succeeded in mounting barriers to abortion, especially in southern Italy, but those barriers can be overcome. And women here don’t have to run the gauntlet of demonstrators you find screaming abuse outside the entrances to abortion clinics in the USA. And no one has ever shot an Italian abortionist.
Posted by Susan Levenstein, MD at 3:02 PM 4 comments:


When it comes to birth control Italians have a preference for the “natural” you can trace to the Catholic Church, which long since banished the contraceptive diaphragm and persuaded most people not to use IUDs, Pills, patches, rings, implants, Depo-Provera shots, or sterilization. Condoms, which Italians usually call preservativi – watch out what word you use for jam or you’ll get snickers – are fairly popular. But what most people do to avoid pregnancy is what they call stare attenti or being careful: watching the calendar, and using withdrawal on days they think (rightly or wrongly) that they’re fertile.


Nonetheless, the Italian birth rate hovers between the lowest and the next-to-lowest on the planet. How come? The main explanation is that – contrary to what I was taught in medical school – withdrawal works. It helps that Italy has a surprising culture of shared responsibility between men and women in this particular realm, so guys are more willing to use condoms, and more skilled at pulling out.
Posted by Susan Levenstein, MD at 12:07 PM 4 comments:

Ripping Off The System

Fraud is a worldwide sport but in Italy, land of Verdi and Puccini, it may get embellished by melodrama. Some years back the administrators at Rome’s Jewish Hospital figured out a solution for their hospital’s unbalanced budget and their own empty pockets: soak the National Health Service. In 2014, after some 20 million dollars had been siphoned off, their scheme hit the headlines with a bang. At first the conspirators had just been overcharging dental fillings as implants, or outpatient procedures as though the patient had spent the night. Poca roba, small stuff, as the Italians say.
The Jewish Hospital staff gradually escalated to shameless double billing and to inventing “ghost operations,” until one day the authorities planned a surprise inspection. That was when the plotters found themselves having to call on their native theatrical flair. A mole inside the regional National Health Service office tipped them off about the upcoming raid, giving them time to dress up an orthopedic ward as though it belonged to dentistry (don’t ask) and a private ward as though it were public. Phony medical charts were fabricated, complete with temperature readings and lab tests, and flocks of patients were shuttled between one ward and another. One hospital chief was caught on a wire tap telling a crony: “The inspectors are coming, it’s time for us to put our little piece of Hollywood into motion. You empty out the patients on the fifth floor, and we’ll cross our fingers.”
Now don’t be shocked, but even in the USA public medicine loses billions every year to greedy cheats. There are macroscams where clinics bill for medications that were never given or buy used equipment as though it were new. Middling scams where doctors and opiate pushers collude. And microscams – the only Medicare bill I’ve happened to see with my own eyes, related to a 3-minute visit for a non-smoker’s athlete’s foot, tossed in a charge for “Tobacco counseling.” All effective in their way, but sadly lacking in pizzazz.
So who’s worse? According to reports commissioned by the European Union, 13% of all the money spent on health in Italy gets lost through corruption, whereas outright medical fraud in the US is said to add up to only 3%. But if you join me in considering obscene overpricing to be tantamount to fraud – mebendazole pills for deworming your kids, two for a buck at your local Italian pharmacy, cost $442 per pill wholesale in the USA, and many American Emergency Rooms charge patients $1000 just to walk in the door before even seeing a nurse – maybe we can charitably call the contest a draw.
Posted by Susan Levenstein, MD at 2:48 PM 1 comment: