When I was maybe five a doctor friend of my parents, Arthur Shapiro, gave me a stethoscope he was finished with. I was thrilled – not about putting the plugs in my ears and listening, but by having a real object, a fetish from the grownup world. Next to that my toy doctor's kit with its little bottle of pink sugar pills paled by comparison.
For checkups my brother and I would get driven all the way from Flushing across the 59th Street Bridge to the pediatrics department in the white towers of New York Hospital. All I remember about Dr. Fraad* is he once reassured my mother about my baby toenail that she thought was growing in funny. Sixty years later I showed her the same toenail and she was still unconvinced.


Most of the time I kind of liked being sick. Sickness turned on my mother’s Fair Illness Code. You got to eat apple sauce with pills crushed up inside, if you had a fever of 100° you got to stay home from school, and after the fever was gone you had a right to one extra day at home. Once during a high fever I hallucinated climbing a huge mountain without ever getting to the top, like Sisyphus with his stone, and I remember I considered it great fun – delirium as a natural psychedelic.
But once when I had an earache I remember my mother weeping helplessly at my bedside. I must have been howling in pain myself, but the sight of her in tears was so astonishing that it’s all that’s stuck in my memory. The torment of another earache stuck in memory as an engulfing red ball that expanded bigger and bigger. The doctor came to the house, I can still see him looming over my bed, but the pain only stopped when my eardrum burst the next day. I found it wonderful to have no hearing from my right ear, and kept rubbing the outside to test it.
Medicine didn’t have much of a presence in my young universe, but expatriation did. Many of our family friends had fled the Nazis, and as Jews by origin if not religion my parents always kept their mental bags half-packed for a quick exit. Which is why my father once suggested that I should become a doctor, advice I scorned for decades. His reasoning was that – in the worst case scenario – I could instantly set up shop as a physician anywhere in the world. He didn’t, needless to say, know Italian bureaucracy!

*added October 12, 2018: An email from a reader set me to googling Dr. Fraad. I learned from his New York Times obituary that he was indeed distinguished enough to be worth the trip across the bridge – Benjamin Spock cited him as an influence – and that he was an active left-winger, possibly a Communist, instrumental in sparking the famous 1969-71 health workers’ collective at Lincoln Hospital in the Bronx. You can hear him speak here, very near the beginning.
*****
Mobile phone readers: to subscribe, scroll way down.

Posted by Susan Levenstein, MD at 7:56 PM No comments:

One day late in 1969, in a back office of Creedmoor psychiatric hospital in Queens, I hiked up my skirt and pulled down my tights. My boss Dr. Gideon Seaman, knowing I would soon be taking off for eight months in Europe, had brought along a huge syringe of gamma globulin and shot that horse dose of protective antibodies into the front of my thigh as I stood in front of him. I fell back onto a chair, passed out from the pain.


What country was he protecting me against? Italy. Why? Because, he said, it’s crawling with hepatitis. The locals would pick up the “infectious” A variety from eating their beloved mussels and clams – they were harvested from polluted waters and cooked, if at all, too briefly to kill any lurking viruses. The “serum” B kind they picked up from mothers as mere tots, preparing them to pass it on as adults through needles and sex; any guy I might pick up would likely have been infected since he was four. (If medical science had known about the C kind of hepatitis at the time – it didn’t – it would have also known that too was big in Italy.)

Today the shoe is on the other foot. Americans are much likelier than Italians to die of infections, mostly because of poor access to health care – not to speak of Italy’s conversion to farmed rather than wild shellfish. Former sins have left their mark on Italy, though, in that several key vaccines reached here decades after they became standard in the States. More cases of measles and congenital German measles are reported in Italy than in any other Western European country, with the number skyrocketing between 2016 and 2017 thanks to a know-nothing “No Vax” movement. And things may get worse: the measles vaccination rate for Italian toddlers fell steadily between 2010 and 2016.


My world-hopping clients often need to attend public travel clinics, which have a monopoly on vaccines against yellow fever and Japanese encephalitis. For decades this was a piece of cake: I wrote a prescription and an address, the patient showed up at the clinic any weekday between 9 and 12, and walked out a half hour later ten dollars poorer, with wisps of cotton taped to their arms. It was a poster child for public medicine. Now the party’s over – in 2013 my beloved vaccinators simultaneously started requiring appointments and stopped answering the phone.


Let me close with the strange case of tetanus. There are 400,000 horses in Italy and they are often healthy carriers of tetanus spores, including the ones you see roving the streets of Rome or Florence with police on their backs. Many of these healthy-looking animals gaily deposit manure laced with tetanus spores on the pavement, manure that then patiently waits for a passer-by to get injured so the spores can enter the body, wake up, and multiply. Italians now over fifty weren’t vaccinated as children, nor were most immigrants, so plenty of the people who show up in Italian Emergency Rooms with contaminated wounds should by rights receive not just a tetanus booster but also a shot of antiserum – a type of immune globulin hyper-packed with tetanus antibodies.


But as far as I know that antiserum has never once been administered, in any Rome hospital, to a single patient of mine. Emergency Room physicians go to great lengths to avoid giving it. They’ll tell patients that antiserum is no good two days after the injury (nope – it works even after three weeks). They’ll branish consent forms that claim it can transmit AIDS (possible in theory but nonexistent in practice). They’ll say tetanus was eradicated long ago (would that it were). Why those docs put up so much resistance is a mystery but it may be merely that the hospitals don’t keep the perishable antiserum in stock. An Italian team that studied tetanus prophylaxis in Naples’s public hospitals just a few years ago concluded, “Only 1.5% of the physicians correctly adhere to guidelines.” The upshot? More than a third of the cases of tetanus in the European Union occur in Italy, with 60 fatalities a year. So be forewarned: odd though it may sound for an otherwise proudly developed nation, Italy is one of those countries where you’ll want to make sure your tetanus vaccinations are up to date.
(This post is being published simultaneously as a Bedside Manners column in The American In Italia.) 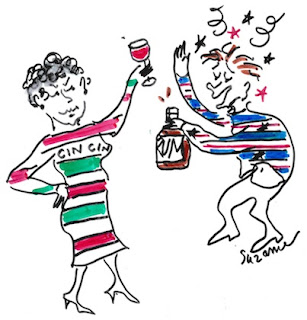 What’s Their Secret?
By tradition Italians consider wine and beer to be foods, not drugs, knocked back to enhance a meal rather than to get soused. When I was first getting invited to dinner in Italian homes, in 1970, the children would be served acquavino, water laced with a few drops of wine. I’m convinced this non-medical homeopathy innoculated them against later dipsomania. Those old habits have by and large held up nicely, but very recently some young Italians have started to imitate the tourists in their midst by converting to the northern European cult of Saturday night drunkenness. Let’s hope it’s just a fad.
As with many American phenomena that favor the all-or-nothing (think Tesla vs. SUV), the United States is overloaded with problem drinkers on the one hand and teetotalers on the other. I sip my way through two glasses of wine every evening with supper, more alcohol than 95% of American women.
Alcoholic beverages are sold in every Rome supermarket and at every corner store, at all hours. The exception is before a soccer match if the Rome or Lazio team is playing against an adversary with notoriously hard-drinking fans, such as Manchester United, in which case City Hall has been known to institute temporary bans in the attempt to keep hordes of drunken Englishmen from taking over the streets.
(Curiously, a horde of drunken Italians is something of a contradiction in terms. Liquored up Romans get cheerful and friendly, not raucous and rowdy. Turns out the way people act when they’ve been imbibing is due at least as much to cultural expectation as to the pharmacological effect of alcohol.)
You’re supposed to be 18 to buy, but this being Italy nobody at the checkout counter is checking IDs. When American “abroad” college students catch on, they tend to go off the deep end and can land in deep trouble – since I’ve lived here a half dozen are known to have fallen to their deaths out of windows, from bridges, or off walls, and that’s not counting the cases that have been hushed up.
A small glass of wine every day throughout pregnancy doesn’t cause fetal alcohol syndrome or anthing else, by the way, contrary to the prohibitionist terror campaign in the United States. Every adult Italian you see on the street was exposed to it and survived.
*****
Mobile phone readers: to subscribe, scroll way down.
Posted by Susan Levenstein, MD at 10:53 AM 6 comments: