When I moved to Rome I resigned myself to getting fat. To my surprise, a year later I had lost 10 pounds.


My new shape blended in with my surroundings. Italians are lately the second-thinnest people in Europe, next to the French; a woman who’s medium-sized by American standard is hard put to find clothes she can squeeze into in Rome boutiques.


How do they stay slender while tucking away all that pasta, olive oil, and gelato? Chiefly, because their attitude toward food is, well, normal. They eat three squares rather than constantly stuffing their faces, they savor their food instead of packing it in, they cherish the collective mealtime ritual of sitting down together at length to break bread with family and friends. Grazing and raiding the refrigerator are concepts as un-Italian as Taco Bell, and six months living under the disapproving gaze of my mother-in-law until my ex- and I found an apartment cured me of both.


That cultural norm of eating when they’re hungry instead of using food as a pacifier means Italians are less likely to get hooked. Food addiction, once you’ve acquired it, is a particularly hard habit to shake. Here’s why: it’s common knowledge that recovering junkies, smokers, or alcoholics have to stay away from their favorite substance altogether. One sneak fix, one fag after one supper, one highball will send the slipper-up back to addict hell. Since you can’t both stay off food and stay alive, the obese are obliged to achieve that impossible goal of eating – consuming the substance they’re addicted to – in moderation.


The kind of stuff that goes in Italian mouths counts too, of course. They put real food on their plates rather than fat- and sugar-packed processed products, quench their thirst with water rather than soda, love vegetables, and after dinner are more likely to eat a peach in summer or an orange in winter than a slice of chocolate cake.


I can’t find any reliable statistics from mid-century, but between watching postwar movies and decades of personally eyeballing the locals I can guarantee you that skinny hasn’t always been the rule. When I first sat on Italian beaches in 1970 I was amazed at the plus size bosoms and bottoms that were wrapped in those skimpy bikinis. Later when fashions changed, Italians’ sensible food culture made slimming down a relative cinch: just slash your standard portion of pasta by half, eat one less course at every meal, and voilà in a decade the national figure shrank from Rubens to . . . Raphael.
P.S. It helps, needless to say, that Italians habitually use their feet instead of their car, and take the stairs without considering it torture! 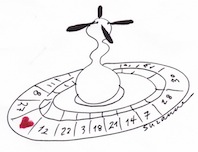 I once had a heart disease patient named Edoardo, the father of a friend, who had angina pectoris so severe he couldn’t cross the room without pain. Back then, in 1989, angioplasty and stenting hadn’t yet been invented, but surgeons did know how to unplug coronary arteries using open heart surgery and he definitely needed it. There was only one problem: in Italy at the time bypass surgery meant at least a one in four chance of dying on the table.


Those were not odds I felt I could recommend. I turned for help to my trusted cardiologist, the late Alberto De Feo, who came up with a solution in the form of brand-new European Union regulations. My patient followed Dr. De Feo’s instructions to the letter. He drove to Monte Carlo on the French Riviera, stayed three days in a hotel hanging around the roulette tables, then went to the Emergency Room of a specific hospital clutching his chest and claiming the pain had just started. He could – and did – get bypass surgery in France and charge the bill to the Italian National Health Service, but only if it was a real emergency.


Even now, after thirty years of European Union rules easing the obstacles to medical country-hopping, such picturesque Emergency Room theatrics are still not entirely obsolete…
P.S. It was lucky this particular heart patient was Italian; I think most Americans wouldn’t have managed to carry off the trick (and might have been more squeamish about its ethics). Pay attention on any Rome bus and you’ll find at least one native casually improvising melodrama. The ancient theatricality of Italian culture gets an extra boost from a school system based on gaming oral examinations in front of an audience…
Posted by Susan Levenstein, MD at 2:33 PM 5 comments: 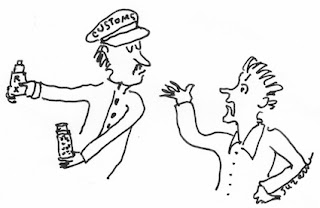 Moral of the story: if you’re coming to Italy and there’s a medication you really really need, bring along enough to last you for the duration.
*****
Sorry for the long gap between posts – vacation intervened! A version of this one has been published as "Musical Drugs" in my The American In Italia column, Bedside Manners.
Posted by Susan Levenstein, MD at 8:10 PM 7 comments: