Jeffrey Epstein and Me

No, the voracious child molester Jeffrey Epstein and I never crossed paths - sorry to disappoint! - and we have little in common. I wasn’t one of the hundreds of girls he recruited as masseuses and then abused. Nor have I had skin-to-skin contact with any child older than three. But I confess to sharing one thing with the late Mr. Epstein: I love massage. And the prominence of his squalid story in recent news reports has made me contemplate how often, among my hundreds of bodywork sessions, sex has reared its ugly head.
One time I was visiting Bangkok with my friend Mariateresa in the ‘90s. We told our host, an American acquaintance of my fiancé – I’ll call him Andy – that we wanted to sample the famous Thai massage. He knew just the place, and soon the three of us were marching down a darkened corridor. At its end, behind a full-length glass barrier, sat a dozen glum-looking young women with numbers hung around their necks. Mariateresa and I turned around and marched back toward the entrance. Andy ran after us and cried, “No, no, you’re misunderstanding, it’s really a normal massage parlor, I swear! The numbers are for you to pick your masseuse.” “Why should we pick our masseuse?” we asked, “And on what basis?” “Here in Thailand,” he said, “That’s the way it’s done.” We chose two particularly plain girls, who ushered us down another ill-lit hallway into a room mainly occupied by a giant bed graced with . . . boxes of tissues. We looked at each other and said something like what the hell, it can’t hurt to try. After the numbered women had finished prodding us and twisting us, yanking our arms out of their sockets, and slinging our legs around their necks, all under Andy’s restless and ever-hopeful gaze, we asked how often they gave massages to men and how often to women. They giggled. “Men only.”
Soon thereafter, back in Rome, storefronts boasting “Thai Massage” began springing up like so many toadstools. Given Italian men’s notorious predilection for exotic sex and Thailand’s notorious eagerness to provide, it’s no surprise that many of those outfits seek a clientele less interested in exploring their meridians than in getting off. Exhibit A: the above “No Sex” sign, from one serious center’s home page, where they go on to elaborate, “If you’re looking for sex don’t call, don’t write, and above all don’t show up.”
Sexual massage for Roman males wasn’t a Thai exclusive. When I was studying watsu (a kind of bodywork done in warm water) there was a “Beauty Center” near the university hospital that happened to have a warm pool just barely deep enough and large enough –for me to practice giving treatments.
Since there was no other option within 20 miles, it was that or nothing. One of my clients was waiting her turn when she heard a young man approach the reception desk and whisper “Can someone give me a special relaxing massage?” (The answer was yes.) A year later the aptly named Extasia got closed down permanently by the vice squad; I hate to think what may have been floating around in that pool.
Another negatively memorable massage involved two self-styled Ayurvedic practitioners in Khajurhao in northern India who laid me and my husband out on bare side-by-side wooden tables, atop the oils and body secretions of all who had lain on it before. Mine couldn’t keep his equally grubby hands from roving – and Alvin told me afterward his couldn’t either. A weird exercise in simultaneity. Maybe they were trying, in their small way, to carry on the erotic tradition embodied in the famed local temple carvings. 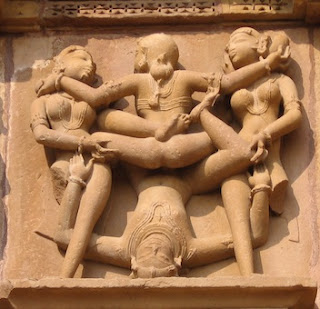 Another time, at a medical conference in Barcelona, I was receiving a quite decent massage in a booth inside the hotel’s fitness center, marred only by a distracting soundtrack of worker-outers’ grunts and pants. At a certain point I noticed the guy’s hands had skimmed my breasts a couple of times and were starting to head elsewhere.
The offer was plain. I said a polite “No gracias,” and his touch reverted to its previous neutral quality. Everyone was happy. Except maybe him, for missing out on a major-league tip. And for the masseuse wife of a fellow conference attendee, who was infuriated hearing the story over dinner, because of the implied slur on her profession.
Women’s day at Turkish hammams usually culminates in a brief massage by a mountainous female clad only in a loincloth. In my experience these have been hasty and humdrum, but friends have reported having the same experience in Edirne that I had in Barcelona. None will own up to having accepted the sexual offer.
I’ve had many massages in Rome, but almost none from Italian men – for a reason. In my early years of practice I met a fellow who presented himself as a potential resource for my patients. Following my policy regarding body treatments, I took an appointment for a test session. He had an elegant setup on Via Veneto, and his matter-of-fact request for full-body nudity wasn’t particularly unusual. But the significance of his ever more insistent focus on my abdomen and inner thighs was just beginning to sink in when he suddenly lifted his hands and announced he would go out to shoo away everybody in the waiting room…
I scrambled into my clothes and fled, noticing along the way, as I hadn’t before, that the diploma on his wall featured the word “tantric.” What truly astonished me was not the attempt at seduction per se, but the chutzpah of thinking that masturbating a physician was the royal road to new referrals.
In addition to being transporting and energizing, my beloved watsu is one of the most sensual of bodyworks. Learning to practice it includes learning to pay close, constant attention to avoiding any hint of sexual charge. I pride myself on being good at that. When my mother was 82 and I was barely out of my training, I took her to Extasia for a session. After concentrating for an hour on keeping her nose out of the water, and hoping my hands hadn’t communicated the anxiety I felt at daring to give a watsu to my own mother, I ended the session in the standard way: brought her to the side of the pool, set her back against the wall and her feet on the floor, touched her third-eye and heart chakras, and gently slid my fingers off hers so we reverted to being two people instead of one.
Then I backed off a few feet, as one does, to wait for her to come back to the normal world. I was eager to hear her first reaction. Would she be ecstatic? Merely appreciative? Maternally supportive? Maternally critical? What actually happened when she opened her eyes was that she looked straight at me and said, “Well I guess that’s probably an excellent means of lesbian seduction.”
Posted by Susan Levenstein, MD at 3:21 PM