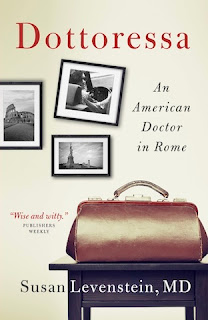 ...that's what Kirkus Reviews calls my book Dottoressa: An American Doctor in Rome, which is rolling off the presses as we speak.😃
Here are some of the specifics that caught the reviewer’s attention:
“. . . One of the first words to learn, she writes, was “pazienza,” or “patience squared,” which is “often invoked as a gentle reprimand for a foreigner’s loss of cool” and “extends beyond the prosaic ‘keep waiting’ to the philosophical.” . . . After finally gaining the official title of Dottoressa, waiting for the sole calligrapher to produce her diploma took nearly two decades. . . . The most interesting part of the book is the author’s descriptions of her alternating admiration and horror at Italian medical practices . . . Doctors almost never touch their patients, but they always listen to every word. Though they write prescriptions, the pharmacist can and will substitute another drug . . . Levenstein also demonstrates how well universal health coverage works. Italians live some of the longest, healthiest lives of anyone on the planet, mostly due to diet, accessible care, and even distribution of wealth. The author gives many illuminating examples of patient encounters . . .”
Posted by Susan Levenstein, MD at 1:27 PM